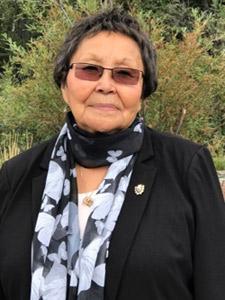 Mrs. Margaret Thom was appointed as the 17th Commissioner of the Northwest Territories on June 26, 2017.

Commissioner Thom was born on the land in the Deh Cho region of the Northwest Territories and currently resides in Fort Providence.  In 1971, she married Jim Thom and is mother to their four daughters and grandmother to ten grandchildren.

Mrs. Thom served as Deputy Commissioner from 2005 to 2011.   She is very active in the North as an educator, counselor, facilitator and volunteer with many years of service to the people of the Northwest Territories.  Commissioner Thom also promotes the North and the people in her travels outside of the Northwest Territories.  She continues to help to preserve the Dene Zhatie and Dene Culture.

Commissioner Thom’s professional career has included work as a School Community Counselor and a Deh Gah Got’ie First Nation Program Officer.   She has led many workshops and has participated in conferences and other events for diverse audiences on topics such as wellness, Aboriginal languages and community development.  Also co-editor of a Dene Elder’s book titled “Nahecho Keh – Our Elders”.

Commissioner Thom has also served as a Governor of the Aurora College Board, the Territorial Board of Secondary Education/Akaitcho Hall Advisory Board, the Deh Cho Health and Social Service Board, Vice-Chair of the Nats’ejee Kéh Treatment Centre, Member of the Social Agenda, the Wisdom Keepers, Dene K’ede Curriculum Development and the Deh Cho First Nation Scholarship Committee.  She also served as a Councilor for the Deh Gah Got’ie First Nation, Incorporated Hamlet of Fort Providence and Senate Member of Zhahti Kue Friendship Centre.

- For Congratulatory Messages
- Invite Commissioner to attend your event